Twas the night before the Bloggers Bash and four little bashers were busy squirrelling away final plans, stuffing winners envelopes and getting ready for the morning. The days of google hangout conference calls are over, Sacha has finished her counselling to stop saying ‘what about another poll?’, the committee has been united and the bash is on the final countdown.

But a rumour abounded that some BOOB was on the loose, and wanted to sabotage our plans. He/she/it/genderneutralbaddie would be in disguise. But which one would be outed/thwarted/twatted? Sacha said she was having none of it and maybe we should re-open nominations….

END_OF_DOCUMENT_TOKEN_TO_BE_REPLACED

We have been asked a number of questions on the Bash, most of which are similar to each other. So we thought we would round them all up and pop them in a post all together.

If you have any more questions that haven’t been answered here, let us know and I will add them to this post and pop them on the Bloggers Bash page.

So without further ado here are the Bash’s FAQs END_OF_DOCUMENT_TOKEN_TO_BE_REPLACED 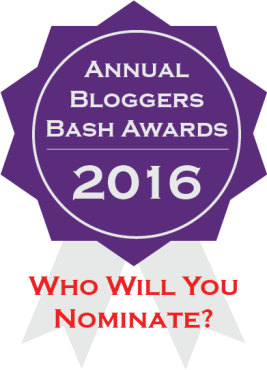 This is it. These are your Bloggers Bash Awards.  BIG thank you to everyone who made suggestions. The committee spent an entire evening discussing all of them. Lots of them were similar or connected to each other, so rather than take each one specifically we have tried to incorporate as many as possible under the awards we have chosen.

We have a number of new awards this year, and some changes to the old ones.

For those new to these awards, they are part of the Annual Bloggers Bash. A physical get together in London, England, every summer. This year’s is on June 11th, if you’re interesting in attending then drop us a line on:

You can find more information here, information about the venue here. If you can’t make it but want to follow electronically, you can join the facebook group here, or use the hashtag (#)BloggersBash to follow the feed live on the day.

We are not accepting nominations YET. We will be open for nominations for the awards on April 22nd. So in the mean time, have a think about who you want to nominate and who you think deserves these awards.

Finally, if you would like a bloggers bash t-shirt then Geoffle will be taking pre orders during April, so hop over to his blog and ensure you follow him for the latest news on them. END_OF_DOCUMENT_TOKEN_TO_BE_REPLACED 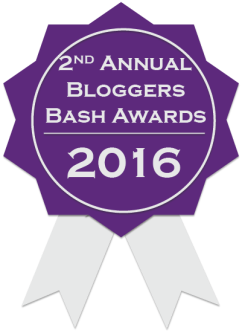 I promised this year would be bigger and better and it really is.

I feel like a school girl at a    Justin Bieber concert. But…. here is our next big announcement…. *Drum Roll Please* END_OF_DOCUMENT_TOKEN_TO_BE_REPLACED

As part of the bloggers bash (the annual get together for bloggers) there are a number of awards given out. Awards that are voted for by you.

Last year, the committee agreed on 6 awards for the bloggers bash awards. However, this year, we are opening up the award categories to you… END_OF_DOCUMENT_TOKEN_TO_BE_REPLACED

The Bloggers Bash Committee said this year would be bigger and better – and trust me, it will be. We, the committee, have plans afoot to make it a cracking day.

If you don’t know what the bash is, it’s an annual get together for bloggers everywhere. The bash is open to everyone, whether you blog about writing, cooking, parenthood, beauty, fishing or anything in between, this is the event for you. AND irrespective of blogging platform – so if you have friends from other platforms please let them know.

This is the chance for you to meet (in real life) all those firm friends you have made through blogging. This year, the bash is on Saturday the 11th June, in London, England.

I said we had plans. We do. The first of those plans is the exciting news that we have secured a venue. And boy is it amazing. END_OF_DOCUMENT_TOKEN_TO_BE_REPLACED

After the stonking success of the first Bloggers Bash, the committee crawled under their respective duvets and hid having exhausted their supplies of extroversion.

HOWEVER, we have recovered, reconvened… discussed, deliberated…. and guess what…. we’re going to do it all over again! THE BASH IS BACK PEOPLE. The bash is really back. END_OF_DOCUMENT_TOKEN_TO_BE_REPLACED

Although I spend most of my weekly wonders looking to the skies, or pulling up rugs and checking what secrets are hidden under there. I decided to do something different this week.

As a fantasy and science fiction writer I have to create entire worlds from scratch. The level of detail needed for that can be overwhelming. One of the things I spent time researching when writing my novel was unusual festivals. I needed to create some rituals around a funeral and a couple of festival events. What I wanted was the detail, the random intricacies of odd celebrations – what are the traditions, what ‘things’ do they have and do in these festivals. This research has done so much more – my head is exploding with ideas, so I had to share this bonkers list.

This has made me question why we obsessively celebrate certain things, How these festivals come into play – what happened to cause the worship of these things, and more importantly what considerations do I need to make about the history and creation of festivals in my own world and stories.

Hope you find these as useful as I did. Here are the most bizarre festivals I found and some of them really, truly are, bonkers! END_OF_DOCUMENT_TOKEN_TO_BE_REPLACED

Now, not all of our wonderful community can make it. The joy of blogging is that we can meet new friends from far away lands. So I thought we would do something that CAN include everyone. I am please to announce the Annual Bloggers Bash Awards.

Is there a blog you simply love? Has someone made you smile week after week? Maybe they have super helpful and informative posts? Or perhaps you have been inspired by them. Now is your chance to nominate a fellow blogger for one of these six awards. Winners will be announced on the 1st August at the bloggers bash and for all those not physically there we will also announce the winners live on twitter using the hashtag #BloggersBash. END_OF_DOCUMENT_TOKEN_TO_BE_REPLACED

The biggest blogging event of the year is here. If you have blogging friends, comrades or just fancy being nosy, then this event is for you. I am organising the first Bloggers Bash. An opportunity for you all to get together and meet the friends you made through blogging, in person.

Everyone is welcome. If you fancy joining us for the bloggers bash in London this summer then read on… END_OF_DOCUMENT_TOKEN_TO_BE_REPLACED