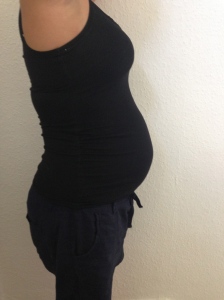 This is my 22 week shot – few days late – but the photo was taken at the right time.

This week has spelt the first onslaught of stretch marks. I want to cry. I have been feverishly rubbing Bio Oil into my skin a minimum of once a day and most of the time twice a day when I remember. I have tried to stay hydrated and done all the things i can. But I have two dots appearing on one hip one on the other, and the start of a very faint stretchmark in the middle of my stomach. I am so upset.

I am not massively vane or anything but I do try to take care of myself, and I like to look and feel good, and this was the one thing I was terrified about. I know theres nothing I can do but I was so desperate for this not to happen, that now having this many start appearing im not only horrified, but can feel myself getting really upset and down about it. I dont want to feel unattractive, and no matter how many of those face book posts showing a heavily scarred bellys and beautiful poems or statements about love and babies – it doesn’t help. I feel ugly and unattractive, and then guilty because I should be grateful I even got pregnant.

Thanks to everyone who voted, and took the time to comment, I thought it high time I let you know that we are having a…….. 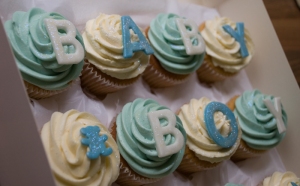 For anyone who does have me on social media – please don’t make any comments regarding the gender as we are keeping it a secret for a little while longer. 🙂

The  wife was obviously over the moon as she wanted a boy, I was certain it was a girl, and had spent 5 months assuming so – so I was somewhat shocked to find out it was a boy. Everyone asked if I was disappointed, I don’t think that’s the right word to use. I was just surprised. I don’t usually get things wrong, so something so fundamental that I had spent such a long time thinking about needed a readjustment process. I needed to process what it meant.

I spent the best part of a week worrying and fretting that I would have nothing in common with our little boy – and that the wife would have everything in common – I am not particularly sporty – although I love rock climbing and the gym – but I dont like football and things – all the normal sports boys like. Anyway – I also am generally a bit of a man hater – you have to be a special man before I will willingly trust you. I have been burnt many a time by men, and so I guess I just worried about what it would mean to have a man in our family. I never imagined our lives with a male in it, and so it was daunting. Don’t get me wrong – I know that I will be bringing up this little boy and therefore able to shape some of his views and certainly his behaviour and hopefully his morals. But still it was a shock as that just isn’t what I had imagined or planned for.

All I had imagined was sitting with my little girl cuddled on the sofa reading together – just like I had done with my mum. I guess I just don’t know many boys who do that. Of course that is not to say our son won’t be like – who knows what he will be like – These are just all the thoughts that ran through my head when I found out.

Also – the horror stories a couple of friends were telling me about their little boys playing with their willies in front of friends etc!! oh dear!! What have we let ourselves in for!!

The main thing from the scan is that HE I must remember I can say he now!! He is healthy, apparently his legs are a little on the short side although in the normal range – just like mine!! haha. Hopefully they will grow at some point!

Right I’m off to visit the mother!!

For someone who rarely gets ill, and soldiers through when she does, I am having a spectacularly bad year. It has been ailment after ailment, and today I have had enough.

I don’t want anyone to think I am ungrateful for this pregnancy, I most certainly am not. However, I have been in pain of one variety or another for the best part of this year.

I ended last year and started this year with tooth ache from hell. I had an abscess on my tooth so big it touched my sinus causing  odema on my face and making me look hideous.

Then we had the issues with my ovaries and all the tests and depression that came with that.

When I finally fell pregnant, I had 3 weeks of sheer exhaustion so extreme I didn’t think I would ever wake up.

My breast so sore I thought they would fall off.

Then the morning sickness started

Followed by the most excruciating headaches I ever experienced.

Then a severe chest infection

and now my solar plexus…. I think the cartilage between my rib cage – primarily under my right breast, is inflamed.

I am in agonizing pain. I can’t sit, lie or walk without it hurting, take a few steps and I am out of breath.

I am exhausted, so worn out from being in constant pain, that today I broke down. Ive cried about 5 times, which is very very unlike me. But it hurts a lot. and everything I’ve read indicates that the pain wont go away until I give birth. I don’t know how I am going to get through it, I really don’t. Being in pain makes you so tired, I just want to sleep to stop feeling the pains.

But I am such a light sleeper, and it its so unbearably hot – and we Brits don’t have air con, so I am struggling to sleep too. 😦

I said I would update you on the 20 week scan… and here I am.

Everything is normal and healthy – although the babies legs are a little on the short side. The sonographer said that they were in the normal range, but on the shorter end of normal. Both me and my mum have short legs, so this wasn’t a huge surprise. I figure, I grew to be normal height for a girl 5″5/6 so I figure this baby will too. Mum said I was short for a baby, but I am average height now. Also the donor was 6″3 so I am hoping that his genes will take over the height issue. Although my dad is not tall for a guy, only 5″7/8…. 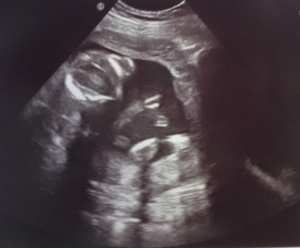 Our novelty shot – the baby sticking its fingers up at us!! 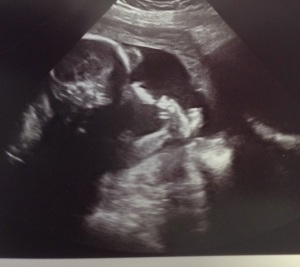 sat down legs out. 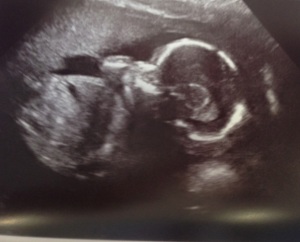 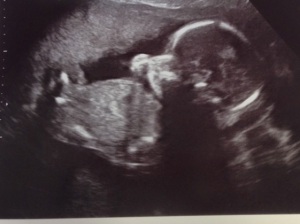 So – as you can see – our baby is a wriggler, it didn’t stop moving the whole scan, and infact the sonographer complained that she couldn’t get a clear shot for the measurements because it wouldn’t stay still!

Explains all the jabs and pokes I have been feeling!!

Anyway… before I tell you what it is…. Lets have a vote…..

Today was an historic day for British LGBT people.

Any piece of legislation in the UK must jump through several hoops before it gets passed into law. Including, several ‘readings’ in the house of commons, debating, reports and committee stages. It then has to go through the same process in the house of lords. Then back to the house of commons for a final run through any amendments, before getting passed up to our dear old queeny for signing into law.

I am over the moon to announce that the same sex marriage bill has successfully gone through the house of lords today. Which means – thats it…. it WILL be law. In a blink of an eye, Queeny will be passing it into law, and by 2014 I will be able to marry my wife!

We had a civil partnership last year and will be one of the hundreds of thousands of LGBT partnerships converting as soon as possible.

I have noticed that France and New York have been celebrating their same sex marriage passings in a very public way…. 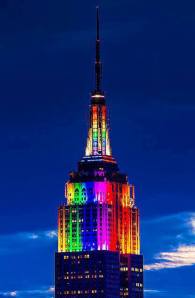 Personally I am hoping that they either light up ‘Big Ben‘ the houses of parliament, or even better, ‘Buckingham Palace‘ !! but something tells me were still a tad conservative for that!!

In the UK we appear to be having a heatwave. Now usually I would be delighted at the prospect. However, being pregnant in this heat is really not fun. 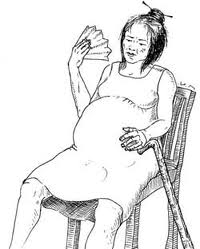 I genuinely feel like someone opened the gates to hell, and is pouring its fiery death heat all over EVERYTHING.

I really, genuinely do not know how african or any women living in the southern hemisphere cope.

Also, I would like to add, why the fuck does mother nature think its funny to skip the last three summers… and then the year I fall pregnant, pour 30 degree (86 F) heat all over us. I mean I know thats not that hot to some countries, but for England it’s ridiculous. We are not used to this kind of weather. We’re lucky if it breaks 25 over summer. So reaching 30 is KILLING ME.

I cannot cool down. Once I get hot, I am a sweating, irritable, waddling mess.

I have had to take my wedding rings off and everything, my fingers are swollen, and my skin is clammy.

Two days time I will be 20 weeks. but thought it was high time I uploaded a bump shot!! 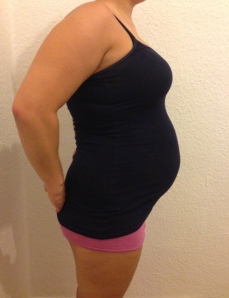 kind of a weird shape no?!

So, I am officially shit. Completely missed the 18 week post, and my 3 blogs a week average is starting to slip…

What can I say?

Pregnancy makes you tired – I really figured that I would be less tired now I am in the second trimester but seemingly not.

I think the whole decorating the house thing kinda exhausted us both, but now it is mostly done – just the babies room to go.

Thursday coming we have our 20 week scan  – seriously half way ALREADY??? wtf.

This week has been tough – we went to buy the pram and car seat and had it all fitted outside the shop and when we came back out someone or something had smashed my windscreen in a footlong snowflake /spider looking thing – I think someone hit it with a hammer, but the wife isn’t so sure, I just don’t see what else could have done it? What do you think? 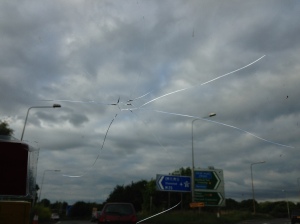 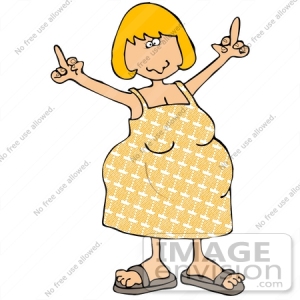 That is literally me! fingers up at the world!

We get to find out the gender at our next scan, everyone, well mostly everyone is excited for us to find out.

I will let you know when we know! 🙂