I don’t mind admitting I’m a selfish reader. I’ve always read exactly what I want for no other reason than, I felt like it. So I never paid much attention to whether or not it was useful or beneficial. But now, as a writer, whilst I still need some of that escapism by falling into a good book, I’ve come to realise I also need to read to aid my writing – and I’m not just talking about non fiction books that teach you writing skills. This is part one in a two part series, looking at reading like a writer – reading what you NEED and reading what you WANT.

When I was at school I hated Shakespeare. I didn’t get it. I didn’t understand any of his wordy sentences, or the elaborate metaphors. I figured he was just another drunk writer that got famous after he died. But then, my discontent was probably more to do with the prescription of school and the incessant deconstruction of texts, than Shakespeare himself. It wasn’t until I voluntarily picked up Shakespeare in my teens that I really grew a deep appreciation for him.

I outlined my writing process and 8 steps to discover your own perfect process last week. I’m drawing close to the end of the first draft of my novel and as a result have started to think about second and third drafts and what might need doing, which led me to Shakespeare. In my second and third drafts come the detail and description.

Whilst I have lots of ideas and a vivid imagination to create plots worlds and characters, as someone who primarily learned to write academic stuff, actually being able to convey the images in my head with enough poetic description to conjure fantastical worlds for readers, takes more practice than I’ve had. I need a parrot constantly sitting on my shoulder barking “Context, Context, Description,” reminders at me. I’m referring to similes, metaphors, and descriptively evocative passages.

So as a writer, that’s what I NEED to read. I need to find novels, passages, and poetry that are spectacular examples of creating vivid imagery through context and description. Who better than Shakespeare himself. (yes there are lots of writers I could have looked at, but I fancied a bit of Shakespeare today!)

Do you know what your weaknesses are as a writer? Could your dialogue do with a brush up? Maybe your characters aren’t quite as full of life as you would like, or maybe your world hasn’t come across the way you thought it would. None of us are perfect. So there will be something you can work on. If you don’t know what you need to develop, then ask someone else. Ask a trusted person who won’t crush you, but will be honest at the same time. When you work out what you need to practice, research writers who excel at it.

It’s ironic that I hated the thought of deconstructing Shakespeare at school, and now that’s exactly what I am about to do! Although there’s a lot we can learn from Shakespeare, for the purposes of this post, and in support of thinking about my next draft I’m focusing specifically on his poetic style and ability to create spectacular imagery.

My favourite passage of Shakespeare’s depicts this beautifully. It’s slightly dark but I adore the imagery and tragic metaphors in it. I give you, Macbeth’s final soliloquy:

She should have died hereafter;

There would have been a time for such a word.

Creeps in this petty pace from day to day,

To the last syllable of recorded time;

And all our yesterdays have lighted fools

The way to dusty death. Out, out, brief candle!

Life’s but a walking shadow, a poor player

That struts and frets his hour upon the stage

And then is heard no more. It is a tale

Told by an idiot, full of sound and fury

I’ve bolded the bit that I really love.

‘Life’s but a walking shadow’ in other words life’s just an illusion. I don’t know about you, but I think that’s a powerful image. It reminds me of Peter Pan’s shadow, prancing around mocking the kids in Wendy’s nursery. I think the way he takes ‘life’ such a complex concept and uses such a simple comparison to draw a powerful image is quite frankly awe inspiring. But that’s the point, right? Use imagery to turn complex concepts into simple images. Sounds simple… *slaps forehead, pulls at face – wishes it was that simple*. 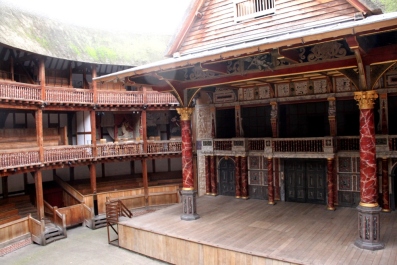 ‘a poor player That struts and frets his hour upon the stage And then is heard no more.’ A poor actor who struts and worries for his hour on the stage and then is never heard from again. Such a sad image; an actor who works slaves for lifetime, practicing through the blood sweat and tears to finally get a break and then, only gets 15 minutes of fame. Forgotten forever, like the army of hopeful thespians who came before him, and the budding recruits yet to come. Sad, yet cuttingly true – not everyone can be famous.

The last line, ‘It is a tale Told by an idiot, full of sound and fury Signifying nothing.’

Life is a story told by an idiot, full of noise and emotional disturbance but devoid of meaning. Not sure how comfortable I am with the sweeping generalization we’re all idiots! But I get his point. We do get caught up in the mundane, or caught up in the shallow intricacies of fads and social hierarchy, and that ultimately is meaningless. Does he really mean that life is meaningless? I hope not, I like to think he is making a point that Macbeth’s life was pointless – he spent it doing despicable acts, and if you do the same, then at the end, life becomes meaningless. Macbeth lived the life of a shadow, an illusion of life.

Isn’t that a wonderful image? Ok, I read into a lot, and the average reader skims through words at a thousand knots trying to get to the end of the chapter, see what happens next. But if I can convey even a slither of that imagery I would be a happy lady.

Tell me in the comments below: do you know what your weakness is? If so, what is it? And what authors do you (or will you) try and learn from?