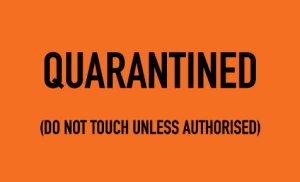 Friday was…utterly ridiculous. I went to my GP just to see what this itch was all about, because it was intolerable, but I assumed that it was just eczema because the midwife had said it was nothing the week before. Anyway – the GP was having none of it and decided that I needed to go straight into hospital and have blood tests – for Obstetric Cholestasis

For Information OC is:

Obstetric cholestasis (OC), also called intrahepatic cholestasis of pregnancy (ICP), is a potentially serious liver disorder that can develop in pregnancy. Normally, bile salts flow from your liver to your gut to help you digest food. In obstetric cholestasis, the bile salts don’t flow properly and build up in your body instead. There’s no cure for OC, but it clears up once you’ve had your baby.Some studies have found that babies of women with OC are more likely to be born prematurely or to be stillborn. It’s not known how much higher the risk of stillbirth is compared to women who don’t have OC. There is no reliable way to work out your baby’s individual risk of stillbirth.

I rocked up to hospital and was basically immediately quarantined – they weren’t sure if I had chicken pox or OC – neither of which are great news – they drew blood decided to give me a CTG ( monitoring the babies heart rate) – which they then thought showed a deceleration, so I was then re-monitored and had to sit with the CTG monitor bands on my itchy rash wrapped round my belly for over an hour – I was becoming more and more displeased with the situation! We had gone in at 3pm and at 10pm there were STILL no blood test results. They didn’t want to release me as they had said that if the tests came back positive they were going to induce me there and then.

Do you know my major concern at this point… as pathetic as it sounds… try not to judge me… but I hadn’t shaved!! I didn’t want to be induced and have hairy legs – not if I was able to have a pool birth! ridiculous the things you worry about when your panicking!!

Anyway – I decided that we would leave hospital because the wife hadn’t eaten for over 12 hours and I had, had just about enough of all the fuss. Suffice to say the results all came back fine and I didn’t need inducing at all – and do you know what they gave me… a bloody piriton – PIRITON – an allergy drug I could have bought over the bloody counter at the local supermarket HOURS before. The irritating thing is my best mate ( a doctor) diagnosed me with PEP (polymorphic eruption of pregnancy) about an hour into me sitting in hospital – all she got was a couple of tidbits of information over a text no exam or anything – sigh – if only she had been able to be my doctor!!

PEP is: a relatively common skin disorder that occurs in women of childbearing age. It usually presents in women during their first pregnancy. Recurrence in subsequent pregnancies is unusual and milder.

It is characterised by an itchy rash that commonly begins on the abdomen, particularly within stretch marks (striae). It most usually develops during late pregnancy (third trimester)

Basically a really annoying itchy rash – delightful, one of the other lovely ailments caused in pregnancy!! Suffice to say the itchy is subsiding now I have the piriton but the rash is spreading – and is now on my thighs 😦

Today was officially my last day at work – I know I finished over a week ago but I had to go in today for half a day for a conference that my team had organised. Half day – so left at about 1 /1:30 and between 9:30 and 1:30 I had no less than 6 people comment on my size…

some of the most ridiculous inducing:

“woah im not being rude, but your fucking huge”

How is “alright fatty” a bloody greeting ??? Why (a women no less) think that it was acceptable to greet another women in that way? irrespective of being pregnant. Just infuriates me. I don’t think I’m that fat? I don’t think I have put on that much weight, but all the constant comments are really starting to get to me, no one ever says anything nice, only comments about how huge I am. I am trying really hard to stay positive, but I am still a girl and I am still sensitive about my weight and its really not nice hearing people comment on how massive you are CONTINUOUSLY – even if the cause is pregnancy.

So tired – still suffering got lots to update too, I can’t seem to bring myself to do anything. Lots of my friends have asked to see me and I’m just too exhausted to even text back, let alone see them. I’m not sure where my days are going I seem to be drifting from one day in a zombie trance to the next. I feel like I’m wasting my days of leave I want to write and read but I just cannot bring myself to do anything. I spent most of yesterday in hospital – don’t worry all fine – they threatened induction but the bloods came back clear and there was nothing wrong – will explain more later

But for now bump photo…. 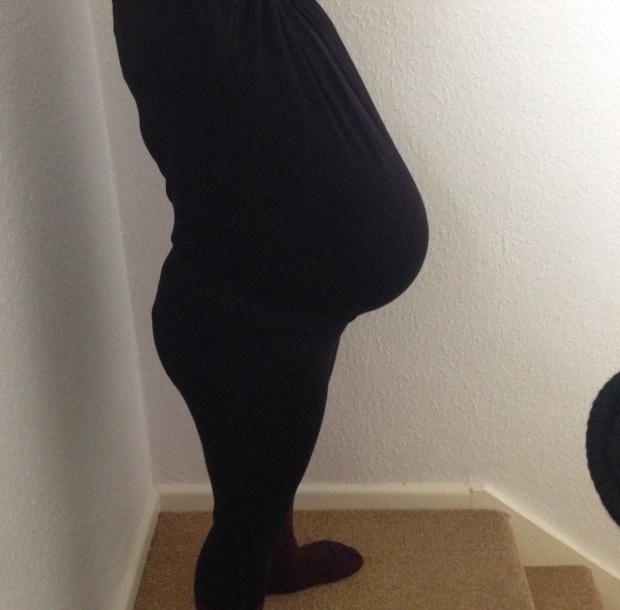 It is all I have been able to do, to just get through work the last 3 weeks – so apologies for the distinct lack of updates.

I have had a kind of extreme exhaustion that has caused all manner of changes! My usual organised self would have by now completely packed her hospital bag, would have sorted the babies room and done all other manner of things, but I have been so extremely exhausted that I could barely function let alone do anything after work. In fact most days I would want to cry on the walk home, some days I couldn’t even get through the day I had to go for a nap.

Well suffice to say that my iron count had dropped and that was why I was so tired.

Anyway, today is my first official day of leave. So I will be updating more regularly! 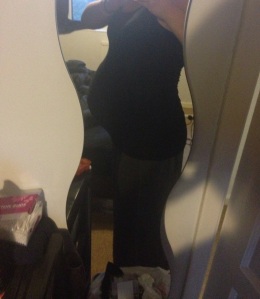 I had a funny turn this week – went all pale and sweaty and ghost like, and I nearly fainted. I got sent home from work and worked from home for two days.

I feel exhausted – like totally utterly and completely drained. I want to cry every morning trying to get out of bed and force myself to work. I sit at my desk and I can feel heavy weights dragging the bags under my eyes lower. I am exhausted to my bones, to my soul, my very core.

I really feel like the funny turn was probably exhaustion related. In fairness I have changed job, moved house – fully redecorated the entire house, started and completed a dissertation and a huge work submission all whilst being pregnant and the only time off ive had is 5 days (2 of which were a weekend) when I was ill. So I haven’t really had any time off so I am not surprised I am unwell.

But heres the thing, I have 4 full weeks left at work and I have to go in for one day for a big work conference a week later – that’s compulsory. But I feel like my body is giving up.

I could leave work a week earlier…. I could. I am due to leave at about 37.5 weeks but I could leave around 36 if I shifted a weeks leave from the end of my maternity to this side. But the thought of doing that makes me feel like a failure, I feel like I would be failing the baby before he even got here, giving up a weeks worth of time with him, to rest. I cant seem to get my mind out of that mindset… it just seems wrong.

I don’t really know what to do.

I have a weeks leave to play with, I could work 4 day weeks for the next 4 weeks, or I could split the hours and work 2-2.5 hours less a day – but that feels like a waste – like I am not really getting anything from using a whole weeks leave. Or I could leave work in 3 weeks instead of 4… or I could just man up and leave when I planned too in 4 weeks time…

I cannot believe I have hit 30 weeks. I really do not know where the last 30 weeks have gone… Life seems to be dissolving in front of my eyes – through a haze of winter colds needing excess sleep and having a ridiculous social life; it appears I haven’t done a pregnancy blog in three weeks – ummm…. Three weeks feels like two minutes ago!

So the big THREE ZERO….

I remember thinking when I was about 6 weeks preggo that 30 weeks would be massive- I couldn’t really imagine ever getting to 30 weeks, it was too ‘serious’ an amount of weeks pregnant for me to ever picture

– it’s like the last stretch – the no going back – the “you should really pack your hospital bag – this shits going down soon-” type serious!!

But strangely here I am…. I am honestly a bit shell shocked that it happened so quickly. I still feel far too in denial to be this pregnant!!

I half heatedly tried to pack a hospital bag and have been watching ‘midwives and one born every minute’ again to try and get realistic about how gross/painful child birth is going to be!!

I have never appreciated childbirth – I am not one of those women who watches and cries when a baby is born – I squeeze my legs shut and try not to vomit!!

I sort of ended up doing a full circle – I watched so many episode that I almost cried at one and then after a few more episodes decided it really was gross and started wondering if I would throw up at the sight of my own afterbirth. I mean really – I faint every time I give blood – not because it hurts or I’m squeamish but because the tube that collects your warm blood rests on my arm and I can feel the warm liquid ooze out…. Ugh.

Honestly why are placentas so vile??? They look horrendous and WHY are they soooo massive?? I seriously hope I don’t see mine or I’m Guna blow!!

I guess having hit 30 weeks I am trying to be a bit more realistic – I booked antenatal classes which start early oct I’ve booked a breast feeding class and as I say started to pack a bag.

The exhaustion is hitting home big time…. I seem to walk around in one state of zombie or another. I’m guessing that won’t disappear for some time either! 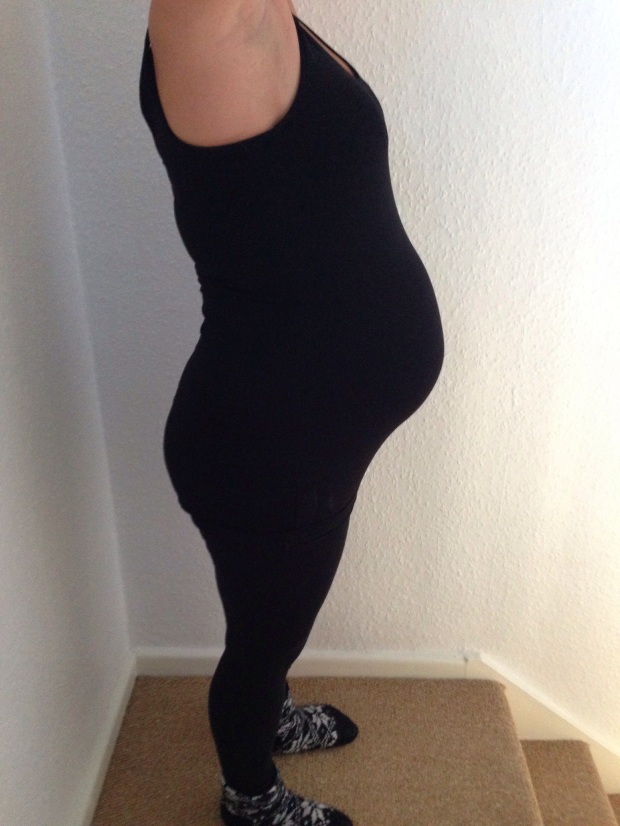