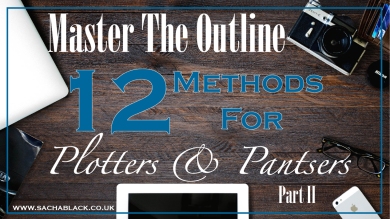 Last week I confessed all kind of Pantser secrets. Like the fact I’m a filthy dirty  cheating hybrid and I actually sit somewhere in the middle of the plotter-pantser hot tub party.

One of the biggest differences between plotters and pantsers is whether or not they outline. In last week’s post, I talked through the first three of twelve outlining methods, including:

Today I am going to run through the rest of them. END_OF_DOCUMENT_TOKEN_TO_BE_REPLACED

If you cut my wrist, I’d bleed pantser all over you. Which, for anyone that knows me in real life, is about as ironic as you can get. I’m hyper organised. I have lists of lists and spreadsheets to make even the hardiest of geeks weep. I’m so extreme my wife has to schedule in time for spontaneity.

Which is why, when I first started writing, I knew without hesitation I was a plotter. Except that I really wasn’t. I tried to plot my way through to finishing a novel and I couldn’t.

Plotting led to me drowning myself in cliches: balled up scraps of paper littered my living room, my laptop screen lay barer than the sahara and enough empty coffee cups loitered on my table to waken even the most exhausted mother. I was blocked.

In the end I threw my rigid-frigid-plotting rule book in the fuck it bucket and NaNo’d the shit out of November 2014. Victory was mine. I finished off the manuscript triumphant. I was a fucking writer at last. The arrogance did not last. After a 3 month break I picked up the manuscript and nearly paper machè myself a coffin out of it. It was worse than finding a maggot in your apple.

Right there. That was the moment I knew then I had to find a way to prevent myself from ever having to re-write anything again.

So I have amassed X different methods to outlining and made suggestions as to how you can use them as a pantser. A few too many for one post – so as is becoming a habit lately, I’ve split them over more than one post. END_OF_DOCUMENT_TOKEN_TO_BE_REPLACED