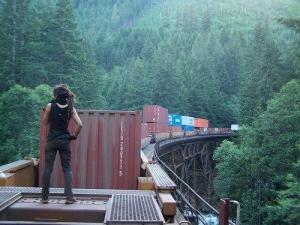 I am feeling worse than ever. I saw the above picture today, and I just cried. For me it’s such an inspirational picture. It takes me back to when I was travelling. Reminds me of the breath taking Himalayan mountains I trekked through. The peace I found when I was there. I want nothing more right now than to run away and climb into a big dark hole, hiding away from the world forever.

I want to be that girl in the photo. I should be that girl in the photo. All I ever wanted to do was go to uni and go travelling. Bum around the world for a while, sucking life experiences in and just ‘being’. No responsibilities, no plans, no cares. Coming from someone so anal, and organised I surprised myself at how much I enjoyed travelling. But I really did find a kind of peace when I was away. A kind of silence. Like the silence late at night when it’s snowed or is snowing. When it’s 1am, and nothing moves not even the air… Travelling was my muse, it inspired me, it humbled me and it gave me peace.

I am a shell, a living breathing carcass right now.

The last year has crushed me.

I don’t think I even know who I am anymore.

The stress of my family during the wedding, the job that has sucked every ounce of individuality out of me and forced a monotonous drone of boring beige routine into my life, and worst into me…. but worst of all the fertility issue.

My senior manager told me the other day that he couldn’t believe how well I was coping. He said no one would notice that something so horrific was happening to me. He said that I was really strong, and he was very impressed with my resilience.

It’s a facade. I am a fake. A plastic temporary smile, that I wear for 8 hours a day that drains every last ounce of anything I have in me.

He shouldn’t be impressed. He might think I am still brilliant, I am coasting through the days just to keep myself going. I am on autopilot… again.

I just didn’t picture my life like this, when I think back, this picture, that girl… that’s who I was going to be. I think that’s why the photo has struck such a deep resonance with me.

I have started testing my ovulation again today… when I ovulate this week, we will be flying to Denmark to try insemination.

The wife is so positive that it scares me. I already feel like a failure, my body… my ovaries are inadequate and I don’t want to disappoint her if the insemination doesn’t work. It only has a 25% chance of working at the best of times, let alone with my problems. I am also worried because I have been trying to be really healthy, but I seem to have got a cold this week… that is not going to help me get pregnant… more worries.

Then the thought of actually getting pregnant is also terrifying. All the life changes, I am still trying to get my head around it all, giving up everything I thought I was going to have, that was who I was going to be in my 30’s… not in my mid twenties. The next 5 years were meant to be fun before we tried to have a family…. I just can’t get my head around it. I just can’t. Why hasn’t someone told me it’s all a big mistake yet? WHY?????

I feel bad because I know I should be communicating, but I just don’t want to talk, about anything to anyone. I don’t want to have to justify myself, and I don’t want to explain my feelings. I just want to be quiet and for it all to go away. I want to wake up in the morning and be that girl in the photo…

I am going to wake up… still be Sacha, still be depressed, still have a job I hate, and still have fertility issues.

I am watching my life through Eden’s eyes.

I am at his mercy.

My glass was always half empty, so I didn’t really notice it becoming less and less full. Eden didn’t arrive with some grandeur entrance, he snuck quietly into my life and changed everything. But nothing was sudden, and I always thought it would be.

I will never see the world through the naive eyes I used to have. Those eyes are gone. They were taken from me. Stolen. He stole them. Eden selfishly took them for himself; replacing them with his old broken ones. The tragedy is, I didn’t notice. Not until I was already looking through his battered eyes.

Until I met Eden, I didn’t actually understand the concept of numb. To really feel nothing.

You can’t conceptualize infinity, and you can’t really imagine ‘nothing’ either. But, I feel nothing. No happiness, no sadness, no pain. Eden took it all away, piece-by-piece. Now I watch my life play out through his eyes.

My life is Eden’s phantom limb. I see it, but it isn’t really there. I used to feel it, but now there’s nothing.

All I can do is look through Eden’s window whilst he torments me. Makes me watch whole days pass by, actions, movements, people. Still I feel nothing. I look at my life, like a leg submerged in water, the ripples make it seem detached, disjointed somehow.

Every day he tears another piece of my soul off, ripping it apart and letting it crumble into ashes.

Eden was my dirty little secret. I was ashamed of him, because I was strong. I was meant to be unbreakable.

But he broke me so easily. I am weak. Useless.

I don’t remember how we met, but now I fight him every day. I beg him to leave, plead with him; and when he doesn’t I punish myself for ever meeting him.

I don’t want him in my life any more, but I am trapped. I am only a phantom limb.

Eden is my depression.