One of the great questions in life. Scratch that. The GREATEST question in life, is whether or not we are alone. Billions of pounds and millions of man hours have been devoted to answering that question. But no matter how many pieces of evidence are provided, our tiny little brains cannot fathom the possibility that we are not alone. Frankly, it feels like even if a goggle eyed grey alien himself were stood blinking in front of us, we’re so damn numbed to the possibility, we’d still deny their existence.

And suuuuure, some of us are open minded. But lets be honest we are the small minority.

I talked recently about the Fermi Paradox, that questions why, if the universe is infinite and there’s infinite possibilities of life, haven’t we come into contact yet? One of the questions still left in my mind, was what if, in trying to contact ET’s we have been both sending out messages they can’t understand and interpreting messages left here completely wrong the whole time.

How would we communicate? and what is the Universal Language? Many claim its numbers and maths. But aren’t those constructions of society and humans? Numbers are a method of measuring but what if our lifetimes span completely different timescales to others, perhaps our numbers would be trivial. Damon T. Berry, writer and filmmaker has come up with a suggested answer that I find intriguing.  END_OF_DOCUMENT_TOKEN_TO_BE_REPLACED

We think we’re real smart as a race. We keep creating bigger and better weapons, anything so long as we got the biggest, best toy in the playground and you don’t. But what if we weren’t the only smart cookies on the planet. What if thousands of years ago, we the arse scratching cave men of the period, or in fact, another race entirely had already made big-bad-apocalyptic-world-destroying weapons?

What if we’re late to the game cause someone else already thought of nuclear weapons 10,000 years ago?!

Well that’s todays wonder – the theory that nuclear weapons are not a 20th century invention at all, but a bronze age creation. END_OF_DOCUMENT_TOKEN_TO_BE_REPLACED

Photo of my necklace and the Ancient Flyer sculpture

I often find myself wondering about my eyesight and the quality of my perception. I mean, how much of what I see is actually ‘real’ versus an illusion. Technically we have blind spots in our vision where our optic nerve joins the back of our eye, yet our brains interpret and fill that space so we don’t actually have a blind spot in our vision. We monkeys are easily tricked by even the simplest of illusions.

Yet there is one visual mystery  I just can’t believe is a trick. The ancient flyer.

The Ancient Flyer is a sculpture and carving that has been found all over the world. Said to be  thousands of years old and yet, upon looking at it, appears to be an aircraft. No, really!

This post has been on my list for some time, but it wasn’t until my son poked my necklace  and said ‘plane,’ that I remembered. That reaction, the ‘point and plane’ is exactly why I  wanted to write this post in the first place. END_OF_DOCUMENT_TOKEN_TO_BE_REPLACED

I’ve always wanted to find a crop circle. I mean, realistically I’d find it, do a flappy hand jig, then pause and have a horrible “oh” moment as I realise I’d have to be in the air to actually appreciate. But still. It’s on my bucket list.

They’re works of art, whether they’re made from the hand of a human or from the oddly artistic feet of an alien space craft, there’s no doubt they still look awesome.

But what is the significance of them? Why do they cause such controversy? and why the shit is it relevant to my writing? END_OF_DOCUMENT_TOKEN_TO_BE_REPLACED 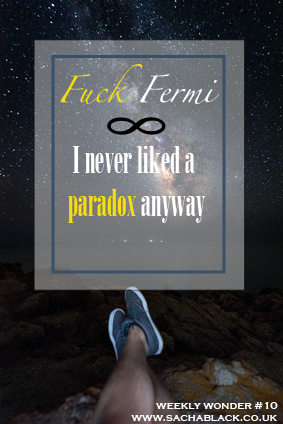 I get questioned a lot on whether or not I believe the stuff I write in my weekly wonders. Mostly, I just like writing controversial or thought provoking stuff. But primarily, I research it cause it inspires my own stories.

But, one thing I don’t mind admitting, is that I am 100% certain we are not alone.

You can’t tell me in that infinite void we call the universe, no one else climbed out of the primordial slime. No chance. I mean, does anyone actually believe that any more?!

But then, if there’s life out there… where the hell is it?

And that’s the question Fermi tries to answer with his paradox. END_OF_DOCUMENT_TOKEN_TO_BE_REPLACED

The Kailasa temple is an ancient Hindu temple made out of rock. The reason it gets featured as a weekly wonder is because of its bizarre construction. Its structural design and complexity, is something that even today we would struggle to accomplish.

Looking at historical buildings and constructions is something that even non historical writers should be doing. History is rife with anomalies and inconsistencies, which even with a hint of imagination can send you off in bizarre directions. END_OF_DOCUMENT_TOKEN_TO_BE_REPLACED

I was going to write about the Hollow Moon theory in light of the post I wrote about Hollow Earth, but as a result of last weeks Flat Earth post, and a future post I am writing as a follow up to that, where I have a real life discussion with Mark Sergeant – creator of the Flat Earth Clue videos, I decided to focus instead on Lunar Waves, and the video footage that is going viral over YouTube.

Have you ever done a presentation in front of a projector screen? You know, the ones with a pull down plasticky screens that shoot up into its roll if you don’t secure it properly, then sending an endless ripple across your carefully crafted powerpoint presentation. Well hold on to that thought whilst you read and watch this:
END_OF_DOCUMENT_TOKEN_TO_BE_REPLACED

There are a couple of films that after the first time I saw them, I felt a little bit less sane. The two biggest culprits being: The Matrix and The Truman Show. They messed with my head, my perception of reality in a way I cannot explain. In my defence I was only 12 when they were released in 1999. It’s weird though isn’t it. When something so ridiculous, so controversial it couldn’t possibly be true, sews just the tiniest seed of doubt. 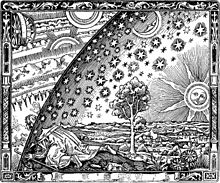 Curtsey of Wiki: The Flammarion engraving (1888) depicts a traveler who arrives at the edge of a flat Earth and sticks his head through the firmament.

For a few thousand years, we thought the world was flat. All 5 big religions, had accepted and promoted theories of a flat Earth. They believed the Earth was flat and at the edge was protected by something called the firmament – whilst they might have differed in their beliefs, they were united on this.

It wasn’t until Copernicus in the 16th century realised the world spun at over 1000mph and 60,000 mph round the sun, that he proposed the globe model. From these calculations he surmised the world was round. That’s it. No more proof no more evidence, it was accepted into mainstream society and still is to this day.

It’s one of those fundamental ideas we are taught on the first day of primary school; the world, is 100% round.

But, humour me, what if it’s not round? What if we got it right the first time? The Earth is flat. As conspiracy theories go, this one takes the biscuit.  END_OF_DOCUMENT_TOKEN_TO_BE_REPLACED

I stumbled across the Hollow Earth theory trying to research the Hollow Moon theory some time ago (more on that another time).  There have been many theories proposing different ideas around the Hollow Earth, William Reed and Edmond Halley being some of the first to note it. The Hollow Earth theory is a conspiracy claiming that the Earth is in fact, Hollow. The way I see it, this hollowness is in two parts: END_OF_DOCUMENT_TOKEN_TO_BE_REPLACED

I mean, isn’t that a given? What water doesn’t have microorganisms and amoebas in it. I mean seriously, there isn’t even bacteria in the Martian water??? Doesn’t anyone else find THAT harder to believe than the fact there’s water on the planet?
END_OF_DOCUMENT_TOKEN_TO_BE_REPLACED