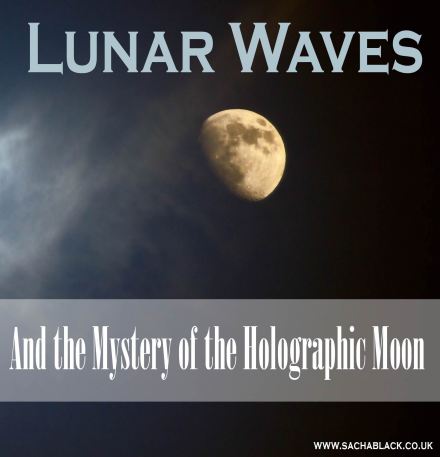 I was going to write about the Hollow Moon theory in light of the post I wrote about Hollow Earth, but as a result of last weeks Flat Earth post, and a future post I am writing as a follow up to that, where I have a real life discussion with Mark Sergeant – creator of the Flat Earth Clue videos, I decided to focus instead on Lunar Waves, and the video footage that is going viral over YouTube.

Have you ever done a presentation in front of a projector screen? You know, the ones with a pull down plasticky screens that shoot up into its roll if you don’t secure it properly, then sending an endless ripple across your carefully crafted powerpoint presentation. Well hold on to that thought whilst you read and watch this:

It appears that during key times, any lay person with a camera and telescope can capture what looks like waves rippling across the moon, as if someone prodded a holographic screen and a ripple washed over the moons surface.

These events only seem to be happening at key times, like full moons. The suggestion is that what we see as the moon is actually just a projection of the moon. There are two parts to this.

The first, which would support the flat Earth theory that suggests there is a dome or firmament (as genesis says) sealing us into a flat Earth. The theory suggests projections are displayed on to the dome (ceiling) producing what we see as the moon and stars.

The second theory is what Crrow777 the original filmer of these mysterious waves thinks. He says the moon actually is up there. But what we are seeing is a projection of the moon, on to the moon in order to stop us seeing something else that’s going on.

Richard C Hoagland an ex science advisor to CBS News has discussed what’s on the moon on multiple occasions and maybe it’s this they are trying to hide. But one discussion I recall seeing recently was after the Chinese moon landing (Jade Rabbit). Hoagland analysed the footage which the Chinese released publicly and demonstrated that there was a dome (yeah I know… another mention of a dome) on the moon. It’s two hours long, so you would be in for the long haul, but it is fascinating to watch, check it out here.

Is the moon a hologram? I have no idea. What’s odd, is that this footage is no longer an isolated occurrence, there are plenty more videos spreading on YouTube showing the same thing. This makes it harder to swallow a ‘camera’ fault or whatever.

Of all the theories, I really hope this one isn’t true. I have been obsessed with the stars since childhood, I love nothing better than staring at a clear night sky in awe and wonderment.

I don’t often thank baby black for waking me up in the middle of the night. But a couple of months ago he woke up at precisely the moment of the super blood moon eclipse. It was breath taking, and the thought that what I saw might not be real, pains me.

I suppose the hologram theory would explain why we see an illusion of the moon not rotating. That is something no matter how many times I try and read explanations I don’t understand. Here, is another explanation.

“The moon orbits the Earth once every 27.322 days. It also takes approximately 27 days for the moon to rotate once on its axis. As a result, the moon does not seem to be spinning but appears to observers from Earth to be keeping almost perfectly still. Scientists call this sychronous rotation.” http://www.space.com

Effectively they are saying they spin at the same rate proportionately which is why it appears still. Seriously what? I don’t understand that at all. Not one bit. Maybe I’m just spatially inept.

There are examples of holograms littered in films and literature. I don’t however recall a story suggesting everything we see is a hologram – other than perhaps the loosely connected Matrix. So perhaps one of you could write the story. What’s going on behind the moon? Is it for our own good? Maybe an alien invasion?

Either way, it’s a cool theory that got my brain thinking of yet more stories, and an awesome way to start the New Year. Hope this year is the best one you have ever had.

What do you think? Did it inspire you? What do you make of the video and the theory?