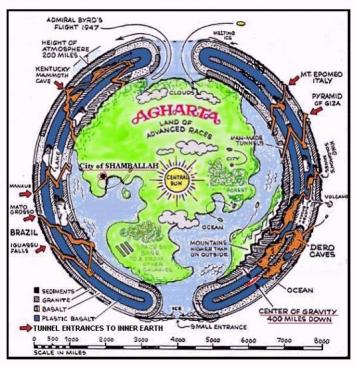 Interestingly Shamballah is also a name coined by Bhuddists (Shambalah). Which refers to a magical mythical land somewhere inside Asia and is thought of as the pure land with beings more beautiful and wise than we. It makes me question whether given the descriptions of the perfect serenity of this land, if there aren’t connections to the garden of Eden?

Tibetan scholars, have taught about an inner world, and claim to be in contact with the “King of the Inner World” or supreme ruler of the entire planet. Which supposedly the Dalai Lama is a representative for the outside world.

What’s interesting is what else the Tibetan scholars say. Supposedly the tunnels connect Tibet with the inner world (which they protect). There are claims of dozens of others connecting tunnels which are scattered across the Earth. For example, those found under the great pyramids of Giza – Egypt, Derinkuyu in Cappadocia -Turkey, South America, the Amazon Basin connecting the lost city of “El Dorado“ and many more. Which brings me to…

The second: this part of the theory connects Hollow Earth to Area 51. Suggesting that Area 51 is actually entirely underground comprising 27 levels, the first of which begins at 2.5miles below the surface. The first 16 levels are controlled by us, the second 11 by other creatures. Theories claim that what’s above ground is called S4 or dreamland. But this goes one step further, claiming that the Earth’s mantle is littered with an underground cave system and tunnels. The only way I can envisage this is much like the London underground! These tunnels are both connecting the surface to Agartha and also used for military purposes. 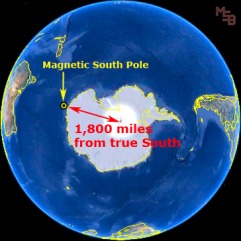 Reed was looking for the North and South poles and as a result of the crazy magnetic readings and difference between true north and magnetic north claimed that they don’t actually exist on land. They are in fact, in the middle of a giant hole – the opening to Agatha, he said. Why?

Because at 70 to 75 degrees North and South latitude the Earth starts to curve INWARDS and flattens. The Earth is not a perfect sphere. Reed says that the magnetic pole is just the outer rim of a magnetic circle around the polar opening of the tunnel to Agartha. Perhaps this is why there is a difference between True North 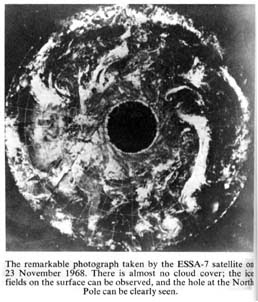 and Magnetic North. Lots of Arctic explorers after reaching high latitudes have been flabbergasted by the inexplicable behaviour of their compasses. When approaching 90 degrees (inside the polar opening) their compasses had a tendency to point upward vertically.

Another strange fact – Icebergs are freshwater – NOT salt water. Weird huh. Well the claim is that it is the fresh water from inside the Earth that freezes on contact with our atmosphere.

I like to be balanced, just to prove a point that this is about ideas for writers, not that I believe everything I read, so here is some contrary evidence:

Gravity. Giant objects like planets swirl and turn, until they spin so fast they clump together creating non-hollow spherical objects – stars and planets.  Ordinary matter is not strong enough to support an entirely hollowed planet against the force of gravity. Or so the science tells us – it doesn’t mention dark matter or the other stuff we don’t have names for yet though…

Current gravity theories suggest anyone on the inside of the hollow Earth wouldn’t experience an outward pull and therefore wouldn’t be able to stand on the inner surface; they would be nearly weightless.

“This was first shown by Newton, whose shell theorem mathematically predicts a gravitational force (from the shell) of zero everywhere inside a spherically symmetric hollow shell of matter, regardless of the shell’s thickness.”  Crystalinks 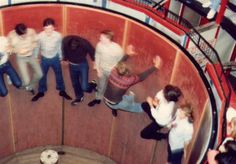 Ok fine, but didn’t we just learn that the Earth isn’t perfectly spherical? And what about those fairground rides that are spherical, and spin really fast – you stick to the inside of the walls well enough… so how does that work?

Well, a tiny gravitational force would indeed arise from the fact that the Earth does not have a perfectly symmetrical spherical shape, as well as from forces arising from other massive bodies like the Moon. This would provide some gravity in essence to stick someone to the surface, but likely, they would need to be moving at the same speed as the inner surface of the Earth. However, if the Earth were hollow, it is likely that the gravitational pull on the surface we stand on, would be much lower.

Does the theory seem plausible? I’m not so sure. What I do find interesting with a lot of these conspiracy theories, is that you often see traces of them in mainstream media. Take the Matrix Revolutions as a case in point, or The Journey To The Centre Of The Earth. In the Matrix, what’s left of Earths population live in the centre of the Earth in a city called Zion where it’s still warmed by the Earth’s core.

This theory is every science fiction and fantasy writers dream. I love the idea of underground tunnels – in fact, as a result of learning about this theory some time ago, I use something inspired by this in my first book, Keepers, which I am now editing,

If you are interested in reading more, there are a number of anecdotes from military personnel who claim to have been there, you can read more here.

What do you think? Have you ever written a story with underground tunnels or a world of people that live underground? Let me know in the comments below.