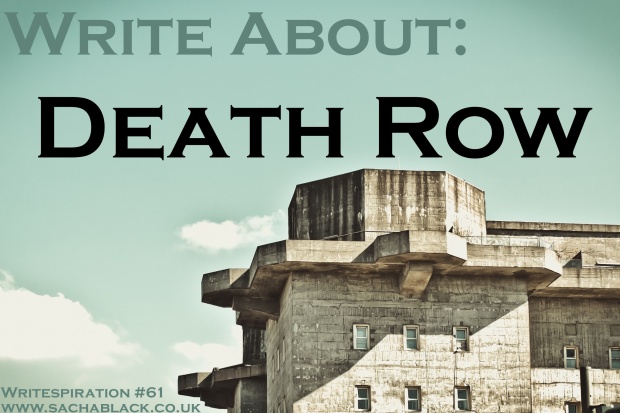 Death row is a serious political topic, and not one I want to share my views on. What I will say is, no matter what side your view sits on, it shouldn’t be taken lightly.

This week, your challenge is to write a piece about death row. It can be from any perspective, and about anything, as long as it is linked to death row.

Here’s mine:I lingered in the doorway, the darkness of my cell calling me back home. But I wanted to cling to the last rays of warmth from the sun. I shut my eyes, letting the tingle of heat settle on my neck and breathed in the dry desert air. It tasted of sand: gritty, but satisfying.

The guard’s baton dug into my back as he shoved me through the door and into my cell.  My throat was like sandpaper. It ached. But not as much as knowing it was the last fresh breath I’d take.

My skin hummed from the tension rippling through the cells of the other lifers. We could always smell death. Every convict’s execution smelt the same: home cooked food. Our precious last meal was really just a beacon of futility. It spread the stench of lost hope through our prison cells like a rabid dog attack.

“Grub’s up. Hope you picked a good’un.” The guard smirked, tipped his hat at me and disappeared.

“Not even a goodbye,” I snorted.

“He was always an arsehole, John. I’ll knife him later if you like,” Mike said, twirling his toothbrush in the cell next to me. Why they let him have a tooth brush was a mystery to me; he didn’t have any teeth.

“Ha. Thanks, but no need to give them a reason to reject your appeal too.”

He shrugged, already resigned to his fate. My heart clenched. I knew his pain. We all knew our day would come. It only took a few years before we all accepted the only certainty there was in here: the monotonous pacing; the tick tock countdown as our feet padded eleven steps one way, eleven steps back until, eventually, we reached the chair and sat – forever.

The smell of dinner wafted down the row, thick and sweet. My meal was ready.

Straight jacket suffocation gripped my chest. I couldn’t breathe. Pins and needles stabbed at my torso. I dropped to my knees and gasped for air.

I’d do anything for a heart attack. For Karma to bestow a kindness on me; an honorable death from fate instead of a villain’s crucifixion. Sweat ran down my neck and arms. I tore off my shirt and slumped against the bars, the cool relief of metal massaging calm into my chest.

My breathing, although still labored, stabilized.

“The guilty ain’t meant to panic, John. We did wot we did. We deserve the needle, don’t we?”

His filthy face pressed against the bars of his cell, distorting his weathered skin. I closed my eyes. The only place I’d admitted innocence was in the court room. In here there was a pecking order and the innocent got eaten. I kept my lids shut and inhaled the juicy scent of roast beef drifting into my cell. I sucked my saliva back down savoring every morsel of flavor.

“I know lad. I know. But you might as well play the part. It’s your fate now, innit?”

I looked at my shirt and saw the length of rope it could make if I ripped it in half. The needle couldn’t have me. Not while I had a choice.

“Don’t do it, boy.” Mike’s arm stretched into my cell like a wraith grabbing for its body, but it was too late. I’d already stood up and torn my shirt.

“DON’T lad… John, please. Stays come in all the time. You still have a chance.”

His words faded into the rumble of other prisoners. I was numb. Heavy with the weight of hopelessness. I tied the fabric to the light, looped it round my neck and stepped off my bed.

Now to last weeks writespiration, where we were writing about the list.

First up Geoffle, with a truly random list, that reminds me of Mr. Adams guide to the galaxy!

When King Zog the Uncertain ascended to the throne (having been assured he could descend just as quickly if he didn’t like it) he found on the seat a box of papers with a list on the top. ‘What’s this?’ he asked.
‘You father’s royal list,’ the Court answered.
‘What’s a royal list?’
‘Every king has to have a list. It defines his monarchy.’
Zog was Uncertain what that meant but he took it on board. He asked for a private audience with his Chancellor. ‘Lomp, apparently my father had a list and I need one. It will define my monarchy.’
‘Yes, your Majesty and what do you want on your list?’
Zog might have been Uncertain but he wasn’t stupid.’Ah ha! I’ll only know that when I have my list.’
Lomp, who, long before the Ascension/Descension/Ascension debacle knew how this sort of conversation could go in circles with never a decision, nodded. ‘Leave it to me.’
He organised the Royal Cobbler to attend his Majesty.
‘Are you sure?’ said the Cobbler?
‘As sure as my name is Lomp,’ answered the Chancellor.
‘You’re called Lomp?’
‘Believe it, sonny. Now can you make his Majesty his Royal Shoes?’
‘I can, but…’
‘But?’
‘He won’t like it.’
A week passed; the old king’s list sat unregarded. The Court became restless, unsure what to do and fearing their new king might be living up to his title. They awaited the weekly audience with the king at which they expected to receive instructions and directions Meanwhile in the Royal Robing Room, Zog sat with Lomp and the Royal Cobbler. ‘Are you sure, Lomp?’
”Quite sure.’
‘Ok, but I don’t like it.’
‘I told…’
‘Button it, boot boy. This way your majesty.’
The Court held its collective breath as King Zog emerged, leaning at an uncomfortable 30 degrees to the vertical due to the presence of one flat shoe and one with a five inch heel. There was a collective intake of breath. Zog began to feel embarrassed, the Court began to murmur when a your courtier rushed forward. ‘You seen to have a pronounced list your majesty. May I help you?’
Zog smiled and nodded at Lomp and took the young man’s arm. ‘Splendid.’

Next the lovely Dwayne is back with this sporty little number, with a cliff hanger ending.

One brown, dilapidated piece of paper. One piece of paper that was the difference between William knowing whether destiny was still in his control or not. This was not just any old piece of paper though, it was one of great value because on it were the names of the lucky ones, the ones whose blood, sweat and tears would not fall in vain, the ones who would be able to take the next steps without having to take steps backwards. “That damn list, if only I had it now so I could see if my name was on it” said an impatient William, his mind fixated on knowing whether he had made the grade, whether he’d made the cut, whether he’d made the team. It was so close, William could see the piece of paper clearly on the table and yet it was so far as the table was in the head coach’s office which was locked. “I really want to know whether I did enough”, William thought to himself as he pressed his face against the door window, he could not help himself, he just had to know if he’d made the cut.
Ever since he was a young boy, William had dreamed of playing for his local football team and now his dream was almost about to happen. But for that dream to come true, he had to impress the head coach and his backroom staff, to show to them that he had what it took to play for such a big club. “Ever tried. Ever failed. No Matter. Try Again. Fail Again. Fail Better.” The words William said to himself before every trial, before every hurdle put in his way, he knew that he had to work hard, work harder still, fail hard, fail harder still and try again in order for him to reach the top. The hours in the gym and on the pitch, all the tackles, the close misses, all the niggles and injuries, all of that was worth going through so as long as he made the grade, for all of that effort to go to waste would bring crippling devastation but William knew that with every failure life brought, he had to get up and try again, fail again and fail better.