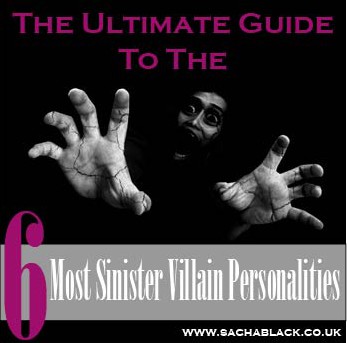 Some villains are just plain nuts, right? Wrong. On a serious note, whether its done consciously or not, I think there are some illnesses and mental disorders that often sit behind some of the greatest villains. Understanding these disorders and their sometimes comorbid nature allows us to create more authentic villains. I want to tread carefully here, I think it’s important to respect mental health and the sufferers, importantly, I am not suggesting people or characters with mental health issues are villains or antagonists, just that some of the great villains have these disorders.

There are some important lessons we can learn from these illnesses which can help us to being authenticity to our characters. Having an awareness of these disorders can give you insight, genuine reactions, and understanding of what the source of their conflict can be – which gives you more plot and more depth to your characters. This post has come from my realisation this week that one of my characters has NPD (Narcissism). I am fascinated by mental health – having studied Psychology for the best part of 7 years, this is a real treat to bring psychology and writing together and particularly as the research is useful for my own novel. Of course, I can’t cover every mental illness, nor can I go into the depth I would love to in just one post, but I have outlined some of the most commonly known disorders that villains might suffer from and hopefully righted some even more common misconceptions.

I have a few recommendations to help with this post: 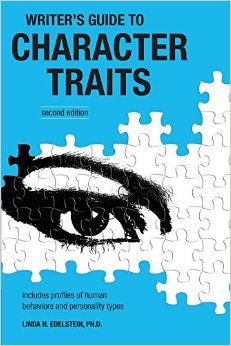 First I wanted to recommend a book alongside this post, The Writer’s Guide to Character Traits

, is a really good blend of psychology infused with the writers perspective. I find it particularly useful when thinking about Villains too because it has a summary of all the key things to think about when designing a villain. Plus it has some unusual disorders like schizophrenia, the mindset of dangerous criminals like rapists and murderers, if you are writing about anything criminal or villain oriented it’s well worth the read.

Second I wanted to recommend a website, which you can search for disorders, whilst it doesn’t have a huge range of information on the disorders themselves, it has a category selection system where you can look up books, movies, people with the disorder, and a range of resources about that disorder. Its called BehaveNet and I think a fantastic tool for writers.

The misperceptions around Schizophrenia are a pet hate of mine. It’s regularly confused with split personality disorder, which I will outline shortly. Another pet hate, is the perception that everyone with Schizophrenia is violent, that’s just not true. Schizophrenia is a disorder of the mind often characterised by positive or negative symptoms which affect how you think, feel or behave. There are five common symptoms of Schizophrenia: delusions, hallucinations, disorganized speech, disorganized behavior, and the so-called “negative” symptoms.

You can find out more about Schizophrenia, including an extremely useful in-depth guide to the symptoms I just mentioned but also a wealth of information on behaviours, causes and effects and a variety of other information on help guide. Interestingly Schizophrenia is not as rare as you would think, with up to 1 in 100 adults suffering with Schizophrenic symptoms. Some early warning signs which would be useful to factor into a characters behaviour include:

The other useful tidbit to know about Schizophrenia is that it has a high rate of comorbidity. This means that you often find people with Schizophrenia, usually have other disorders too. Most commonly with Schizophrenia, is substance abuse, closely followed by anxiety and depression. But other comorbidities include OCD (Obsessive Compulsive Disorder), PTSD (Post Traumatic Stress Disorder) and Panic Disorder. Including another disorder in your villain could give you the twist you need to make them unique.

The most obvious example of a famous villain with Schizophrenia that springs to mind is the Green Goblin from Spiderman. Although the most famous film I can think of is ‘A Beautiful Mind’.

There are plenty of villains that loosely fall into the category of having multiple personality disorder, some depicted more closely to the ‘real’ disorder than others, but these include: Harvey Dent – Two Face, Gollum, Catwoman, Jekyll and Hyde, and my own personal favourite Tyler Durden from fight club.

Arguably some heroes are even portrayed on the fringes of MPD – take, batman and superman.

Again, you can find a wealth of information on BPD on help guide. Like Schizophrenia, it is found found with comorbid disorders, including: depression, substance abuse, bipolar, eating and anxiety disorders. There are nine symptoms which you can find more information on, in the link above but they include: Feeling suspicious or out of touch with reality, Explosive anger, Chronic feelings of emptiness, Extreme emotional swings, Self-harm, Impulsive, self-destructive behaviors, Unclear or unstable self-image, Unstable relationships, Fear of abandonment.

If you are considering using BPD as a disorder for a character it is worth noting that the causes of BPD are widely accepted to come from a combination of inherited or internal biological factors and importantly, external environmental factors, such as traumatic events in childhood. This is important as you may want to include a key event or series of events in your characters backstory.

Famous villains with BPD include: Adolf Hilter and Eileen Wuornos. Characters in films include, Glenn Close in Fatal Attraction, Winona Ryder in Girl Interrupted (A favourite of mine) and Nurse Ratched.

There is a significant difference between OCD and OCPD, but it is often confused in literature and film.

Obsessive-compulsive disorder (OCD) is an anxiety disorder which can be characterized by uncontrollable and unwanted thoughts called obsessions. These  obsessions are repetitive and lead to ritualised behaviours (like cleaning) the sufferer feels compelled to do, these are called compulsions and often manifest to allieviate the obsessions. If you have OCD, it is likely that you recognise your obsessions and compulsions are irrational but are still unable to resist them. For a full and detailed explanation of OCD have a look at the help guide pages.

Famous movies with characters with OCD include: As Good As It Gets and the Aviator.

OCPD is different. For a start it is a personality disorder characterized by a preoccupation with orderliness, perfectionism, and mental and interpersonal control, usually at the expense of flexibility, openness, and efficiency. That might sound like someone you know, and that’s because it is the most common personality disorder, with up to 10% of the population suffering.

The Savvy Psychologist outlines 5 key differences between OCD and OCPD, but loosely they include: insight, distress, guilt, anxiety and time. To draw on one – insight, those with OCD are aware that their actions and behaviours are unreasonable. People with OCPD however, think their exceptional standards are reasonable and the only way to accomplish anything. PsychCentral has an excellent guide to OCPD, but the key symptoms and behaviour include:

Television brings us two excellent examples of characters with OCPD, including: Niles Crane from Fraiser and Monica from friends with her exceptional cleaning standards, and there are elements of both OCD and OCPD in Adrian Monk from Monk.

Narcissistic personality disorder is a mental disorder in which people have an inflated sense of their own importance, a deep need for admiration from others and a distinct lack of empathy for others. But sadly, behind this mask of ultraconfidence lies a fragile self-esteem particularly vulnerable to the slightest criticism.

You can find a detailed description of NPD on PsychCentral, but the following symptoms are included:

” Has a grandiose sense of self-importance (e.g., exaggerates achievements and talents, expects to be recognized as superior without commensurate achievements)

Is preoccupied with fantasies of unlimited success, power, brilliance, beauty, or ideal love

Believes that he or she is “special” and unique and can only be understood by, or should associate with, other special or high-status people (or institutions)

Has a very strong sense of entitlement, e.g., unreasonable expectations of especially favorable treatment or automatic compliance with his or her expectations

Is exploitative of others, e.g., takes advantage of others to achieve his or her own ends

Lacks empathy, e.g., is unwilling to recognize or identify with the feelings and needs of others

This is the most common of the six disorders found in villains. Neither Sociopathy nor Psychopathy are terms accepted in Psychiatry or Psychology, although there are widely argued differences about the biology and heredity of the two, it appears that they are commonly being lumped until a united terms of Antisocial Personality Disorder (APD). Although my understanding is that whilst Sociopaths are able to interact meaningfully with society their moral compasses are eschewed their behaviours are impulsive and they rarely have regard to consequences before acting. Psychopaths on the other hand are completely emotionally apathetic cruel and highly organised and risk averse to protect themselves, hence my post on my favourite famous Psychopath, Dexter. Psych Central has a great explanation of the differences.

APD is characterised by a long term disregard for other peoples rights often starting as early as childhood. They often lack empathy are callous, cynical and have an inflated sense of self importance. They are cocky, have little regard for current or future problems and can often come across charming. PsychCentral has an in depth guide.

Famous characters with APD include: Dexter, the Joker, Patrick Batmen from American Psycho.

That’s it folks, I know it was a long post, but hopefully it has been useful if your characters have any of these tendencies :).

Please note, anything recommended in this post and any post, is completely my own choice to do so, and founded in my own personal opinion only. I have not been requested or paid to make any recommendations.