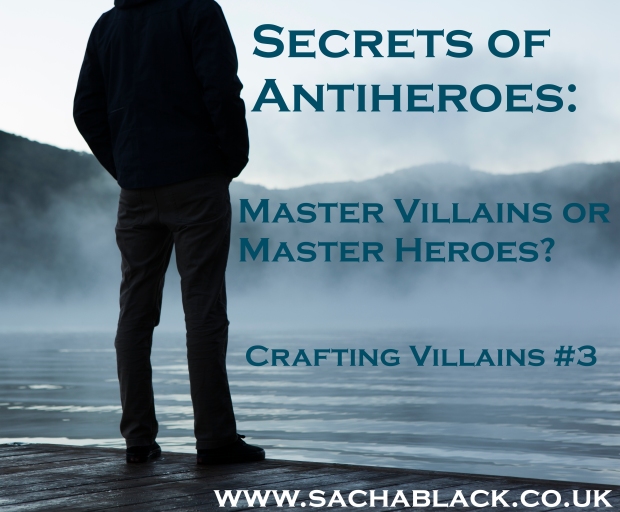 What is it about Anti Heroes that is so damn appealing? I can’t help myself. If the protagonist is an antihero I am like a salivating dog. I cant get enough of whatever it is I am reading or watching. I’m a self-confessed Antihero Addict. I want to explore what it is about them that we all love so much.

Who are your favourite antiheroes? and more importantly why? Are you writing about one? Have you read about one recently? What do you or don’t you like about them?

So What Is An Antihero?

Your typical hero is charming, wonderful and full of positive attributes. But antiheroes are the opposite, Wiki says: The antihero archetype can be traced back at least as far as Homer‘s Thersites. So they have been around a while, which means there must be something that makes them appeal to us that goes beyond fads, and fashion. There must be something classical about an antihero that means they work time and time again.

Typically an antihero is a protagonist who has specific characteristics such as:

Antiheroes blur the line between villains and heroes. What tips them into the hero category is that there is often a line, usually a moral or ethical one that they just wont cross. They still have their humanity. But this leads them to a mess of contradictions and confusions.

What Makes an Antihero Different?

Antiheroes make mistakes, lots of them. They are so often motivated by personal interest rather than altruism that if put into a corner, and forced to choose between right or wrong, the antihero will often choose wrong, because they are weak, its easier and it gets them what they want quicker. Often antiheroes think the end justify the means, and they will pursue that end by any means possible.

Why Are They So Appealing?

It’s evolution 101 find your own species attractive. To find them appealing. Well, antiheroes are the truest reflection of ourselves. Not all of them granted – hopefully most of you don’t want the murderous side to Dexter. But elements of their behaviour and personalites are.

Antiheroes embody humanities darkest secrets and desires. They blur the line between what dark and twisty parts of us really want, and what society says we should actually want. They have the affairs we cant, they stab their boss in the eye with a fork because their an arse, they cheat, lie and steal and all in order to pursue their own desires. Antiheroes have their cake, and they con their way into eating it. Antiheroes fulfill your darkest desires and still ending up as the good guy.

It’s the ultimate fantasy. What’s not appealing about that?!

Need An Example of A Good Antihero? Here’s A List of Some of My Faves: