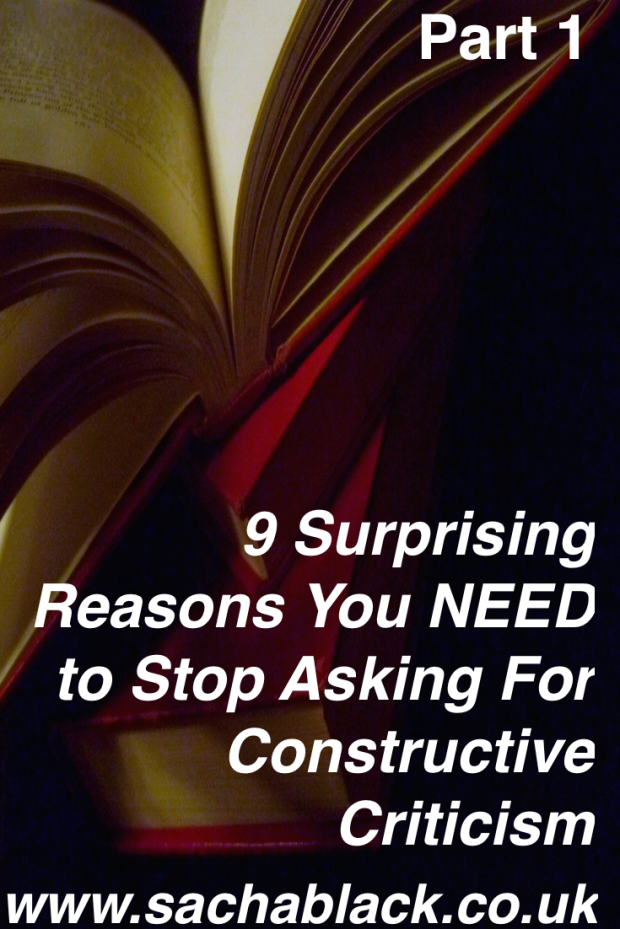 The first two explanatory points in the dictionary for criticism are:

I don’t believe in constructive criticism, and I really don’t think you should be asking for it. Now, don’t get me wrong. I am not suggesting for a moment that you shouldn’t ask for feedback. Actually I think the total opposite, you absolutely should ask for it. After all, none of us are perfect and how do we expect to learn if not by having feedback or being questioned about our work? But, I don’t think you need constructive criticism in order to develop. You need:

Don’t roll your eyes, I promise I’m not arguing semantics, stick with me and keeping reading to the end and hopefully I can convince you otherwise…

Constructive criticism is inherently bad. We slave over our work and when we’re done, we offer it out we ask people to criticise it. Why? Have you ever actually asked yourself why you want to be criticised?

I don’t think you do. I certainly don’t.

We often talk about the old adage of ‘hardening’ ourselves to criticism. But why are we doing it? More to the point why should we? It’s bad for our wellbeing and mentality. There are plenty of scientific studies looking at dogs (like skinners  experiment- where he shows the effectiveness of positive reinforcement over negative) or studies that look at children, using the same concepts.

What about Dr. Masaru and his rice jar experiment?

Ok, so a bit extreme as an example, but you get my point… So why do we as adults think it’s ok to damage our psyches? To purposefully ask for something that harms our state of mind and potentially slows or halts our writing progress. There’s scientific evidence to prove my point here – stop asking for criticism and start asking for constructive comments.

I don’t care who you are, or even if you are the most hardened receiver of criticism. If you get criticised, it hurts. Which hurts your writing. Why do you want to do that to yourself?

Some authors have made a killing writing books on positivity. On the power of it, and benefits of being positive – Just look at those jars of rice. Isn’t the book ‘The Secret‘ all about positivity, and deciding you are going to do something and then achieving it because you decided you would? Well precisely. Why are we asking for negativity on our babies? On the work we are most proud of? It seems utterly bonkers to me.

4. Criticism slows you down

When you are criticised, it takes time to process. You need to read it, leave it, let it cognize and come back to it when you are stronger and able to consciously process it. This takes time. I think that’s wasteful. I don’t want to take time to process feedback. I want to read it, accept or reject it, embed it, learn from it and move right on. I don’t want to spend weeks thinking about what went wrong, or how badly I did such and such, or what a terrible writer I am because I didn’t do x, y or z. It’s a waste of what precious little writing time I have, or quite often and more to the point, don’t have.

5. Asking for criticism shuts your brain down

I know what I am like, if I get criticised I immediately jump on the defence band wagon. Whether I show it or not, (usually not). Mentally I reject the comments, and refuse to accept or acknowledge their probably justified points. I say no. Instead of learning I out and out reject the valid points, I don’t learn from them and I don’t take anything from them. It takes me an inordinately long time before I can accept what anyone has said. Refer to point 1,2 and 4. It slows me down and takes me forever before I learn anything from it.

I think giving constructive criticism is just as bad as receiving it. It affects me, (see points 1-3) If you mercilessly judge someone without giving a thought to their psyche and the damage what you are saying will do, then you either need to work on your emotional intelligence, or, your just an arsehole. In which case I advise not asking other arseholes for feedback.

Writers and those embedded in the writing world have an expectation that we must ask for and give criticism. If society said on your eighteenth birthday you needed to leave your family and never speak to them again, or jump off a high cliff without a parachute or soft cushy landing bag, you would do it, would you?

Just because there is an expectation you need to be criticised as a writer, doesn’t mean you have to be.

Writers work bloody hard to craft hundreds, thousands and sometimes hundreds of thousands of perfectly woven words and sentences to light imaginations on fire. They deserve respect for even attempting the feat. Which is why they DO deserve your feedback and comments and precisely why they don’t deserve your criticism.

9. It’s ok not to be criticised

My last point before I make a suggestion on what you really need is that I want you to know as a writer – It’s ok to not ask for criticism. In fact you should feel empowered to NOT ask for it. Just stop. Don’t do it any more. The world isn’t going to implode, your pens won’t spontaneously combust and you won’t immediately become a rubbish writer.

I can feel you shouting at me from across the bloggisphere about how criticism helps you grow. How it makes you a better person. I know, because I have had to fight myself to write this post. I am just as engrained in the writing worlds’ insistence on criticism.

Well I am calling bullshit on it. You can grow and develop as a writer without being criticised and actually I think you can do it faster without the criticism.

If you don’t ask for constructive criticism then, what should you ask for in order to still learn from feedback (which, I will impress again, is vitally important despite the title and contents thus far of the post). I think you need to ask for…

A method of constructively appraising a piece of work, using positive reinforcement.

That’s it. No big secret.

I highlighted constructive and positive because they are the most important words. Just because your phrasing your feedback in a positive way, doesn’t mean you aren’t suggesting areas for improvement. In fact you ought to be doing the opposite. The important thing is how you say it.

I feel like I am my mother now, but haven’t all our parents said at one point or another – if you can’t say anything nice, don’t say anything at all. Well I would like to rephrase that for this post:

And by that, I am not suggesting you leave out anything, especially not mistakes or where you spot room for improvement, I am just saying think about how you do it.

I said I wasn’t going to have a semantic debate, I’m not. Ok, I lied. I am a little bit. The thing is, if you ask for constructive comments you are immediately giving a different impression to those you are asking for feedback. You are subconsciously telling them you don’t want or need criticism. But fear not, you are still asking for constructive comments. It’s in the name. Doesn’t the it do what it says on the tin?

This is what it says to me:

“You there, reading my beloved short story, or slaved over novel, be nice, but be constructive. I need comments that will help, not hinder my work.”

2. Constructive comments are positive, and constructive

If you do it correctly, you can smile sweetly and be confident that the feedback you are giving will be listened to, appreciated, and learned from, and in some cases even raise confidence.

If you want to know more about constructive comments, how they have affected others and how to constructively comment, then tune in for part II on the 9th March 🙂 But for now I would love to know your thoughts on this post, are you for or against constructive criticism?